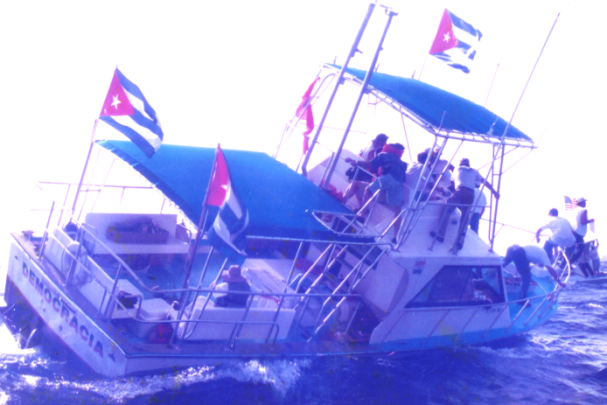 KEY WEST -- Members of the Cuban exile Democracy Movement group are scheduled to embark this morning for the waters off Cuba, where they will detonate a barrage of fireworks in commemoration of independence hero José Martí's birthday.

Two boats -- the 39-foot Democracía and the 35-foot Human Rights -- are scheduled to depart at 11 a.m. from City Marina at Key West's Garrison Bight. The fireworks are expected to be lit at about 9 p.m.

One man who will be noticeably absent from the voyage is Democracy Movement leader Ramón Saúl Sánchez, who will see the vessels off and monitor their trip by radio.

Sánchez and two other Cuban exiles will be tried later this year on federal charges of violating the Coast Guard's ``Security Zone'' around Cuba by illegally venturing into Cuban territorial waters during a flotilla trip last July.

Both boats were originally scheduled to stop somewhere off Havana, but Sánchez said Friday that organizers may dispatch one of the vessels to waters off the beach resort of Varadero.

The boats will refrain from entering Cuban waters, according to Sánchez, although one is scheduled to stop very close to Cuba's 12-mile territorial limit.

``The Democracía is going to go to 12.5 miles, the HumanRights will go to 14 miles from shore,'' Sanchez said.

The Coast Guard will inspect the vessels for safety before they depart, while cutters and aircraft already scheduled to be in the vicinity of the event will watch their progress, spokesman Luis Diaz said.

``We will check whatever they are putting on their boats, make sure the pyrotechnic fireworks are OK,'' Diaz said.
Sanchez says two licensed fireworks technicians will handle the multicolored light show.

``These are the same type that you see in Miami at the end of the year in Bayside,'' Sánchez said. ``Some of them explode again and again.''

The light show is scheduled to coincide with a poetry reading along Havana's Malecón promenade, where people flock each evening to stroll and catch a breeze.

Sánchez said the ultimate goals of the ``maritime operation'' are to show solidarity with the Cuban people while sending a message to Cuban President Fidel Castro.

``I'm sure Castro, knowing him, might be peeking out to the north, probably being very sorry that he is unable to match us or to sink us,'' Sánchez said. ``We are establishing a bridge of communication with the Cuban people through light.''