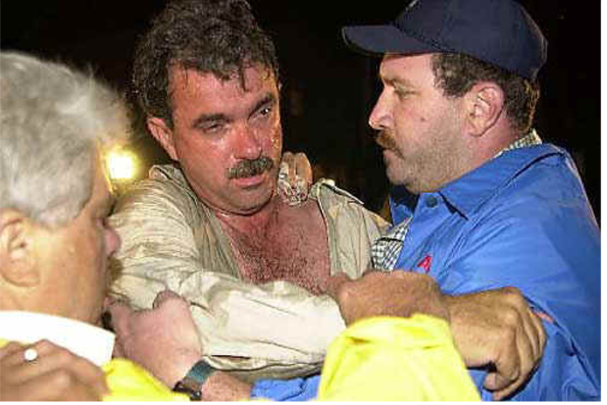 Ramon Saul Sanchez, mastermind of many large exile street protests in Miami in recent years, has emerged as the man behind civil disobedience plans to prevent the return of Elian Gonzalez to Cuba.

His message is always nonviolent. But there is no doubt that when Sanchez calls a protest it can cause chaos.

In the mid-1990s, Sanchez led sit-ins that caused massive traffic jams in Miami -- and ticked off many motorists. Exiles were protesting a change in U.S. policy that allowed the Coast Guard to intercept rafters at sea.

Once an unknown in the exile community, Sanchez, 46, is now the person many in the community turn to for guidance on how to respond to developments in the Elian case.

Sanchez spends his days at the Little Havana home of Elian's Miami relatives, instructing demonstrators with a megaphone, and even sleeping in his car. He and his team brought flowers to the crowd so they could be seen on national television welcoming Elian's father and his grandmothers when they visited.

When truckers recently conducted a wildcat  strike to protest higher gas prices, Sanchez won their appreciation by showing up  at their demonstrations at the Port of Miami-Dade.

Now, the truckers are repaying Sanchez with truck caravans around the home --  to show solidarity with Elian's Miami relatives who want to keep the child in the  United States.

At the Elian home, Sanchez has taught demonstrators how to lock arms and form  a human chain around the house -- a move that seems to go beyond civil  disobedience.

But Sanchez plays down the significance of the human chain as an act of  obstruction.

''It's a human chain of solidarity,'' Sanchez says. ''It's symbolic. Some people have  misinterpreted that we will get in the way of federal marshals.''

Pressed further, he says they would jump out in front of the marshals, but then  allow their entry because ''we have a responsibility for the safety of the community  and of Elian Gonzalez.''

The pressure is taking its toll on Sanchez, who was exhausted Sunday.

Once a secret gun-toting commando, Sanchez seems to have grown more  passive over the years. He says he admires the work of Martin Luther King Jr. and  Mahatma Gandhi, and tries to follow their example.

Sanchez, who styles himself a philosopher, says nonviolent demonstrations  make a louder impact than violent protests. He knows that violence would only  give critics a stronger voice.

Beyond Cuban exile causes, Sanchez stakes positions on domestic issues that often depart from the more conservative stands of the exile community.

He comes out in favor of workers in labor disputes, supports fighting poverty  through social programs and endorses enhancing the civil rights of women.

Sanchez grew up in Colon, a town in Cuba's Matanzas province.

He immigrated to Florida when he was 12 years old. Over the years, he has married four times -- all unions ending in divorce.

His first two wives were 17 at the time of the marriage. Sanchez was 26 and 34, respectively, according to public records.