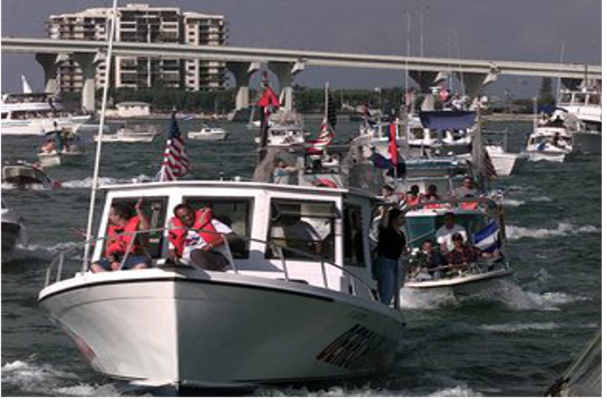 For those who sailed close to Cuba on Saturday, the flash represented hope.

OFF THE COAST OF HAVANA -- Perched on the bows of boats, exile  passengers with mirrors bounced rays from a blazing midmorning sun toward
Havana.

Some 13 miles away came a flash -- this one seeming to come from the top of a  building in central Havana's Cayo Hueso neighborhood. It was just a flicker. Who  could be sure what it meant?

But for the Cuban Americans who sailed close to Cuba on Saturday, it was hope.  A sign that someone was watching. They burst into excited cheer.

``It's an act of defiance!'' said Felipe Delcueto, of Miami, moving a little to the left  to catch better rays. ``I'm telling Castro I'm still a Cuban, and I care about my  people!''

Tossing multicolored carnations into the ocean, members of the Democracy  Movement -- a Miami-based, anti-Castro exile group -- sang the Cuban national  anthem, recited prayers for those who perished and mounted a show of  mirror-flashing unity with dissidents on shore.

Organizers of the event said they had telephoned their contacts in Havana to alert  them to the show of solar solidarity slated for Saturday morning.

Passengers marveled at the outline of Old Havana beckoning in the distance.  Some looked with wonder and sentimentality at the shores where their parents  were born.

``It's amazing to see how they respond; it's emotional,'' said Michelle Leon, 29, of  Miami-Dade County, as she craned her neck to catch another flash. It was the  first time Leon had ever glimpsed Cuba.

The group stopped about 12 1/2 miles from the shores of Havana to hold their  ceremony, as three U.S. Coast Guard boats, including a 378-foot,
helicopter-equipped cutter, stood watch. Brothers to the Rescue flew two planes  overhead.

``Every Cuban has worked here to show respect to the people who died in the 13  de Marzo [boat],'' organizer Ramón Saúl Sánchez said. ``It's very difficult for every  Cuban here, because we can't continue toward our homeland.''

With relatively calm seas, a full moon to guide them -- and promises by  organizers to stay out of Cuban territorial waters -- there were none of the sorts of  difficulties that plagued the event in previous years. Boats departed from Key  West at 11:30 p.m. Friday, returning just after 2 p.m. Saturday.

One minor injury was reported: an 83-year-old man stumbled at sea and cut his  head on a boat.

For Cuban exiles who had driven three hours from Miami in hopes of landing a  spot on the long, hot journey, Saturday's ceremony offered a chance to recall  someone no longer in their midst: Elián González, who last month was returned  to Cuba after a bitter, seven-month custody battle.

``Elián is very much on our minds,'' said Frank Alvarez of Marathon, one of the  event's coordinators. ``Very much.''

Elián's great uncle Delfín González was a quiet presence on board The Two  Amigos, one of the flotilla boats.

Aboard the lead flotilla boat were two brothers who were on the tugboat in 1994:
Iván Prieto, 32, and Dariel Prieto, 28. The Prietos were among the Cubans who  hijacked the 13 de Marzo on July 13, 1994, in a vain attempt to flee. The tugboat sank after being rammed by Cuban gunboats about seven miles north of Cuba.
View All Stories Related Stories