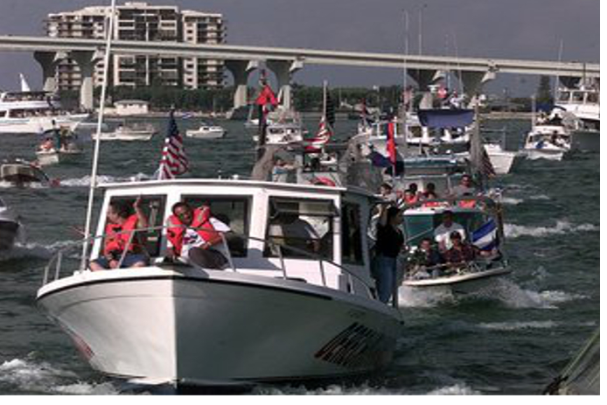 Following a hunger strike by the mothers of Cubans detained at the Krome detention center, the leader of the Democracia Movement began a hunger strike of his own Wednesday asking for the return of a boat seized by the federal government.

``I'm willing to give up my life, not for the boat, but for the principle of it,'' Sanchez said. ``You can buy a boat anywhere, but you cannot buy a right.'' He said he is appealing to the President of the United States, by whose direct order the boat was seized.

The 35-foot boat ``Human Rights'' was seized by the U.S. Coast Guard some 25 miles south of Key West in international waters Dec. 10. The boat is being held by U.S. Customs, which sent a letter to Sanchez refusing to return the vessel because ``no assurances were provided by you that you did not intend to enter Cuban waters.''

Although members of the group say they were heading to Cuba to hand out copies of the Declaration of Universal Human Rights on the 50th anniversary of the document's signing, the group declines to tell the Coast Guard where it is going because it believes the question violates civil rights.

Sanchez now has 30 days to post a $2,800 bond and request a court hearing so a judge can decide the boat's fate. If he does not post the bond, the government can sell the boat at an auction. Sanchez has not decided yet what he'll do.
View All Stories Related Stories