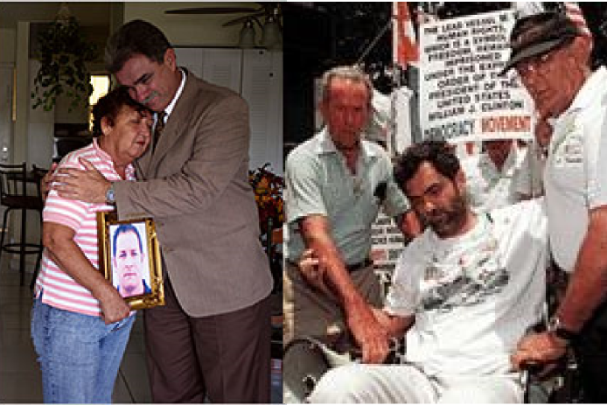 HIALEAH, Fla. — Four months after they appeared in the waters between Havana and Miami, the four dead men remain nameless. At a morgue in the Florida Keys, they lie on stretchers stacked like bunk beds, their bodies chewed by sharks, their faces too putrified to be recognized.

“How many mothers are going through this?” Ms. Garcia said in an interview at her daughter’s apartment here as she awaited DNA results on the bodies. “How many more are crying for their losses? How many young people have drowned in this sea? How many?”

Fifty years ago today, many Cubans cheered when Fidel Castro seized power in Havana, and even now, the revolution attracts many fans — as evidenced by the Canadian tour agencies advertising trips “to celebrate five decades of resilience.”

But the bodies speak to a different legacy. Here in South Florida, where roughly 850,000 Cubans have settled over the years, repeated waves of painful exile and family separation define the Castro era. The revolution never met their hopeful expectations, the island they love has slipped into decay, and for many, this week’s golden anniversary provides little more than a flashback to traumas, old and new.

“It pounds in everybody’s conscience every day,” said Ramon Saul Sanchez, 54, the founder of Movimiento Democracia, a Cuban-American group known for using boats to stage protests. “Fifty years is something very hard to accept.”

Some Cubans remain defiant. Huber Matos, a former revolutionary leader who came to Miami after Mr. Castro sent him to jail in 1959 for suggesting that the Cuban government included too many Communists, said that the anniversary inspired him to keep pushing for change.

But for many, the revolution’s 50th anniversary has inspired a period of reflection. Cubans across Florida say they are mourning privately, or trying to forget, and formal commemorations are being kept to a minimum. If Miami in the 1980s was a place of militants, where “Havana vanities come to dust,” as Joan Didion wrote, today it is also a home to newer arrivals who ask, Must the pain go on?

A poll released this month by Florida International University shows that 55 percent of Cubans in Florida favor lifting the United States embargo against Cuba, up from 42 percent a year ago. It is the first time a clear majority has held that position since the survey began in 1991.

President-elect Barack Obama — while backing away from an earlier pledge to meet with Cuban leaders during his first year in office — condemned the current “failed policy” during the presidential campaign and promised to make it easier for Cuban-Americans to visit relatives on the island or send them larger amounts of money.

Even among those who support the 46-year-old embargo, like Senator Mel Martinez, a Republican, continued damage to families has become a more prominent concern.

“This is an ongoing tragedy,” said Mr. Martinez, who left Cuba at age 15 and spent four years without his parents. “How many people today are still being separated? How many people in Cuba are making plans to leave?”

Ms. Garcia was a “balsera,” one of the 38,000 rafters who fled Cuba in 1994. She said she left her suburb of Havana because her daughter needed medical care she could not get in Cuba for a brain tumor. Her son, Osmani, stayed. He was 20 at the time, a speaker of English and French, who became an independent journalist.

His work often put him at odds with the Castro government. In one dispatch, published on Oct. 26, 2007, he condemned Cuba’s foreign minister, Felipe Pérez Roque, for mischaracterizing comments from President Bush.

“I will not take the time to point out all the lies told by Felipe Pérez Roque at this press conference, but I will say there was a worried look on his face and those of his cohorts,” Mr. Garcia wrote, in an article posted online. “It almost seems that they too are realizing there is little time left to the Castro dictatorship and that change is very near.”

Instead, over the next year, political pressure on Mr. Garcia increased. In June, according to a report in a Cuban online forum, he was arrested and interrogated by state officials. Two months later, his mother said, he was filmed by a Cuban television reporter at a protest against the government, scaring him enough to flee.

Mr. Garcia’s relatives said that on the night of Aug. 15, he climbed aboard a boat with no motor and seven or eight other people, pushing off from an area near Havana with hopes of reaching Florida within a few days.

The pace mattered; the sea was churning. By early Monday morning, Tropical Storm Fay had moved through Cuba into the Florida Straits, bringing nearly a foot of rain, swells of several feet and winds that would strengthen to 60 miles per hour.

Ms. Garcia, 64, a home health aide, said she was not sure if her son had known the storm was coming. Even if he had, she said, “he was desperate and needed to go.”

She said her son had done all he could to change Cuba from the inside. “How can Cubans confront the government, with rocks and sticks?” Ms. Garcia said. “Everyone has nothing, and the people are afraid.”

She found out about the bodies from the news. The first one, tagged 0107 in morgue records, appeared in the waters off Craig Key just after 5 p.m. on Aug. 21. A fisherman called the Coast Guard, and two Monroe County police officers pulled the dead man from the teal-blue sea. Three other bodies followed, appearing offshore over the next 24 hours in a line heading north.

Detective Terry Smith, one of the lead detectives investigating the case with the Monroe County Sheriff’s Department, said the locations and currents suggested that the bodies had probably spent several days in the water, drifting from somewhere to the south, though the Coast Guard’s computer analyses were not definitive.

Their identities have been even harder to determine. E. Hunt Scheuerman, the medical examiner for Monroe County, which includes the Keys, said all four bodies were naked and gnarled, with only three defining characteristics. Body 0107 wore a ring with a Celtic cross and green stone on the fourth finger of his left hand; 0109 arrived with a white sock and blue Lotto running shoe on his right foot; and 0110 had a tattoo on the inside of his lip that said “Raquel.”

Ms. Garcia said the ring sounds similar to one she gave Osmani, but the ring in the morgue is yellow, suggesting gold, and the ring she gave her son was silver.

She said she hoped her son was at the American military base in Guantánamo Bay, Cuba, where she was processed before coming to the United States. And initially it seemed possible. The Coast Guard stopped a boat near the Bahamas with eight or nine Cuban rafters a few days after Aug. 15. But it must have been another group, Detective Smith said; Mr. Garcia’s name could not be found on the Coast Guard’s list of repatriated refugees.

At least two other Cuban families in Miami are in a position similar to Ms. Garcia’s. In emotional phone calls, they have told Detective Smith about relatives who left Cuba on Aug. 15 in a boat, never to be heard from again.

“What if the four we received are not any of their relatives?” the detective said, discussing what haunts him most.

DNA may be the only way to know for sure. In September, Detective Smith swabbed Ms. Garcia’s mouth and sent the sample to the Federal Bureau of Investigation for a comparison with the bodies. For the other two families, the DNA must be collected from closer female relatives, who live in Cuba.

Mr. Sanchez, of Movimiento Democracia, has been trying to arrange for secure samples from the island. “There are hundreds, probably thousands of Cubans who think they lost relatives in the high seas,” he said. But so far, he has received little help from either the Cuban or American governments.

And so the cycle continues. According to Coast Guard statistics, 10,489 Cubans have been stopped at sea since the beginning of 2005, more than double the 4,223 who were caught in the previous four years. A report in May from the Institute of Cuban and Cuban-American Studies at the University of Miami found that 131,000 Cubans had settled in the United States permanently over the last four years, and its title predicts more of the same. “Not Going Away,” it says. “Cuban Mass Migration to Florida.”

Ms. Garcia said she just wanted an end to the 50-year pattern: the uncertainty, tears and tales of woe.

Three months after her DNA reached the F.B.I., she is still waiting for answers. Conversations about her son are drenched with tears, and she is never far from a photograph that shows him staring straight ahead, with a stern face, a few wrinkles and thick, dark hair.

It looks like a passport picture — of a man who may have only reached a Florida morgue.
View All Stories Related Stories
View All Photos Related Photos
View All Videos Related Videos